What are the essentials basics of bullfighting and where can I see one? 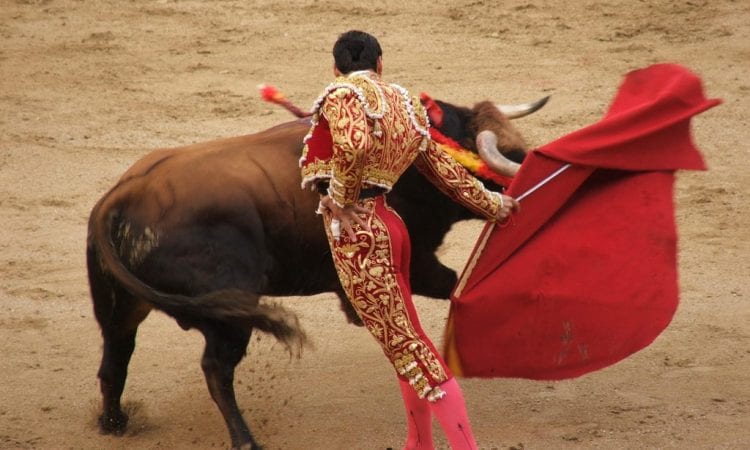 A bullfight in Spanish is called a corrida de toros. Everyone (and I mean absolutely everyone) whether they support it or not seems to have a very strong opionion on the subject. I wanted to discuss some of the basic principles because so many people have expressed an enormous curiosity about its rituals and practices.

Some basic points the layman should understand:

Despite that, Seville to most stands to represents the capital of la lidia, or the art of bullfighting. It is there you will find the second oldest ring, capable of seating 14,000 people with tours available almost daily in summer in English and Spanish simultaneously for 3 euros. Despite their long history in Seville, only 3 bullfighters, or toreros as they’re known in Spanish, have ever been killed inside the ring. Like most Plaza de toros, they also have a emergency operating room and a chapel for prayer prior to the fight. For more information see www.realmaestranza.com

You can bring your own beer or wine and sandwiches, and may wish to bring a cushion for the hard concrete seats which many bullrings have.

The best place to see a fight may be Madrid. For up-to-date listings of upcoming bullfights, visit www.las-ventas.com (in Spanish only but click on x for dates of upcomingfights) and to book tickets see www.tickettoros.com. For other bullring and fight info see www.toroentrada.com or www.torosensevilla.com or www.portaltaurino.com (has English)

Duende-literally refers to a hobgoblin, but also the inexplicable power of attraction, ability and spirit of certain toreros and flamenco artists

In Portugal, bullfighting, or the Tourada as it is known, has basically the same principles as Spanish bullfighting with a few major exceptions.

In southern France,on Wednesdays in July and August in Arles and Nimesshows featuring Course Camargue style bullfights where the bull is not killed are held at the Arena, an old Roman coliseum dating from the mid-1st century. Razeteurs

Undoubtedly the greatest resource available in English is Ernest Hemingway’s Death in the Afternoon, which deconstructs many of the very confusing and misunderstood aspects of bullfighting. Federico Garcia Lorca, Spain’s greatest poet, has this to say on the subject from his book, In Search of Duende:

“In the midst of the Iberian summer they open the rings-the altars. Man sacrifices the brave bull, offspring of the sweet cow, goddess of the dawn, who is alive in the dew. And the huge heavenly cow, a mother whose blood is always being shed, demands that man, too, be sacrificed. Each year the best bullfighters fall, torn apart by the sharp horns of bulls who, for one terrible moment, exchange their role of victims for that of sacrificers, as though the bull, obeying some secret instinct or unknown law, had chosen to carry the most heroic torero, delivering him (as in the tauromachy of Crete) to the purest, most delicate Virgin.”

While I am the first to acknowledge that it may not be for everyone, it is an extraordinarily powerful and moving experience.  I myself have been moved to tears on many occasions and the laymen will find that there is always a great sense of pathos, both for bull and bullfighter inside and out of the ring.